Co-Working early signups will be available on November 10th. 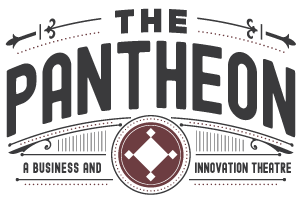 (Vincennes, Indiana) On November 15th, a new business will be opening its doors in Vincennes, and there's a success story behind it.

The ribbon-cutting will be outside the doors of The Pantheon, a century old entertainment palace in the heart of the historic district, which has taken on a new life as a business and innovation hub for the region.

Former Army National Guardsman Mike Folsom earned his master's degree in computer science, and worked as an IT consultant and trouble shooter for other companies. His dream was to start his own business. "I can talk about computers all day, but I didn't know a thing about a business plan," Folsom says. RedAubsTechnology fulfills an unmet need for many small businesses and startups by providing a full range of IT services. While Folsom is based in the Knox County region he can provide remote services to anyone around the globe.

A friend suggested he go to The Pantheon, which opened a new world, and a new future for Folsom, and more would-be entrepreneurs. In the same building where music and comedy once premiered, a vibrant co-working community exists. Purdue University’s Foundry Program provides mentorship and guidance for startups. Legal assistance in forming a business is also provided. "They have all the resources there," says Folsom, who has his office now at the Pantheon. “It allowed me to come up with a business plan that resulted in investors making my business possible.”

Folsom's success is also a milestone for the Pantheon. RedAubsTech, named for his red-haired daughter Aubree, is the first startup to become a business because of the resources and guidance it offers. "It changed my life," he'll tell you. "It's a dream come true."

"Michael is the perfect example of a hard working entrepreneur, who possesses the technical skills and work ethic, and just needed help with business plan development and office space to transform his dream into a business,” said Nichole Like, President and CEO of The Pantheon. “We are thrilled to see him launch RedAubs from The Pantheon and look forward to telling this story time and time again as we build a vibrant entrepreneurial system in our community."

The Pantheon (PantheonTheater.org) is a storied 1920s styled theater with 15,000 square feet of renovated workspace. The site sits in downtown historical Vincennes, Indiana and is the heart of co-working and entrepreneurship in Knox County. Its mission is to develop resources, services and a community which will foster innovation and help entrepreneurs and businesses prosper in the region. The operations are proudly backed by the Davidson School of Engineering at Purdue University and the Purdue Research Foundation.